Somewhat impulsive this trip is. Susan texted me two months ago and said, “Let’s go on a cruise. I want to go on a trip.” I hesitated briefly but whatever Susan wanted I knew I had to do. She has been the one dealing with Mom and her Alzheimer’s while I have stayed here going on with my life. Besides I haven’t been on a cruise in years and this was a great way to spend some time with my sister.

She booked this five day cruise out of Miami. So here I am in the wee hours of the morning while it is still dark outside filled with excitement and anticipation of seeing my sister and going on a cruise again after all these years. My flight is scheduled to leave at 6 am they are just getting the airport open. I check in, go through security and am now sitting at the gate.

We are told that the flight is delayed. I feel butterflies in my stomach, my heart begins to beat faster. I have a connecting flight I have to make in order to meet my sister at the Miami airport and go to the cruise port. No time for the flight to leave yet. I find out that Charlotte airport is backed up due to early morning fog and we have been told to stand down until further notice.

My mind is racing. Will I make it for my connection, if not will I make it in time for the ship, my sister will be confused and worried when I am not at the airport waiting on her. How do I let her know, she doesn’t have a cell phone? I feel a panic attack coming on. I breathe deeply, in-hold-out, again, holding off that panic attack. I love traveling but this first day for some reason alerts my nerves up to attention. I just want to get on my way and be there already.

It is now apparent that I will not make my connection. Other people are in the same situation. My turn to rebook another flight to Miami. First they tell me that they can’t get me to Miami until after 3pm which will be too late to make the ship…frustration and disappointment take over the panic. I say no that will not do. I have to get there earlier than that. I have to make my ship. My sister is waiting for me at the Miami airport. Finally after much insistence the attendant gets me on a plane that arrives in Miami a little after 1pm, two hours after I was supposed to arrive but at least it is in time to make the ship.

Now my concern is my sister. Will she freak out, be worried? Will she wait for me or will she leave and go to the ship without me? We take off out of Wilmington and I make the new connection to Miami. At least I am on my way. I am a little calmer but am still worried about my sister.

I arrive in Miami and turn my phone back on. In comes a text from a strange number it says, “Your sister is looking for you. Text me back please.” Contact yea! I text the person back. “I have just arrived am heading to baggage claim now”.

Arriving at baggage claim I see a Carnival Cruise Employee directing people to the check-in area. I approach her and begin to tell her I am looking for my sister. She gets all excited. “I know where your sister is. I will go get her for you!” Apparently all the Carnival employees in this section were alerted and looking for me.

My sister arrived and when there was no sign of me, she checked-in at the Carnival Desk in the terminal where she arrived. She asked at the desk if I had checked in. The person at the desk told her he couldn’t tell her due to security and confidentiality. She then headed over to the terminal where I was arriving. She had no idea that I had been delayed and was on a different flight so when she saw that the flight I was supposed to be on had arrived she got concerned.

She asked at the Carnival desk where I would check in if he could tell her if I had checked-in yet. This person realized she was concerned so he asked her where I was arriving from. He then told her that no passengers from Charlotte had checked-in yet. She knew now that I wasn’t there but no idea why. She was pacing around the area looking for me and not sure what to do. She asked each Carnival employee in the terminal if they had seen me.

A women who was waiting for the Carnival Shuttle saw her and realized she was upset about something and asked her what was wrong. She poured out the story. The women, Mille, asked her if she knew my cell number and my sister pulled out an envelope where she had written down my number. That’s the text I received as I arrived.

I saw my sister and the Carnival employee heading in my direction and I walked quickly towards them. We hugged and laughed and talked and talked releasing all the stress of these last hours. We were together!! We thanked the Carnival worker and went and got my suitcase.

Then we headed to the Carnival desk, I checked-in. Susan introduced me to Mille and her brother. I thanked her for helping my sister and I connect. She told me that she saw her pacing around very distraught and she just wanted to help if she could. We were all going on the same ship, the Carnival Destiny. The shuttle arrived. We talked all the way to the ship. 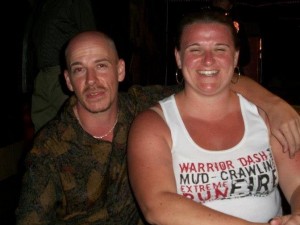 Mille (on the right) and her brother

Since we had already checked-in and had our Sail & Sign cards we went right onto the ship. We made plans to connect with Millie and her brother during the cruise for a drink. And off we all went to find our cabins and get settled in.

All was fine now. We could relax and have fun!! After checking out our cabin we headed to the Lido deck for a drink!!!   Let the Fun Begin! 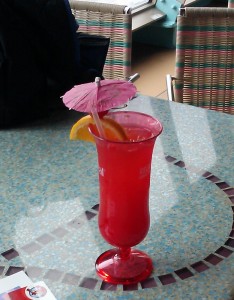 Note: This cruise took place December 2012. I have reminisced and now an catching you up to our return to traveling and cruising together working my way up until the present of our Sister Travel Adventures. I will continue writing and keeping you up to date as we cruise and travel together.

Note: The Carnival Destiny was refurbished after we were on it and renamed the Carnival Sunshine